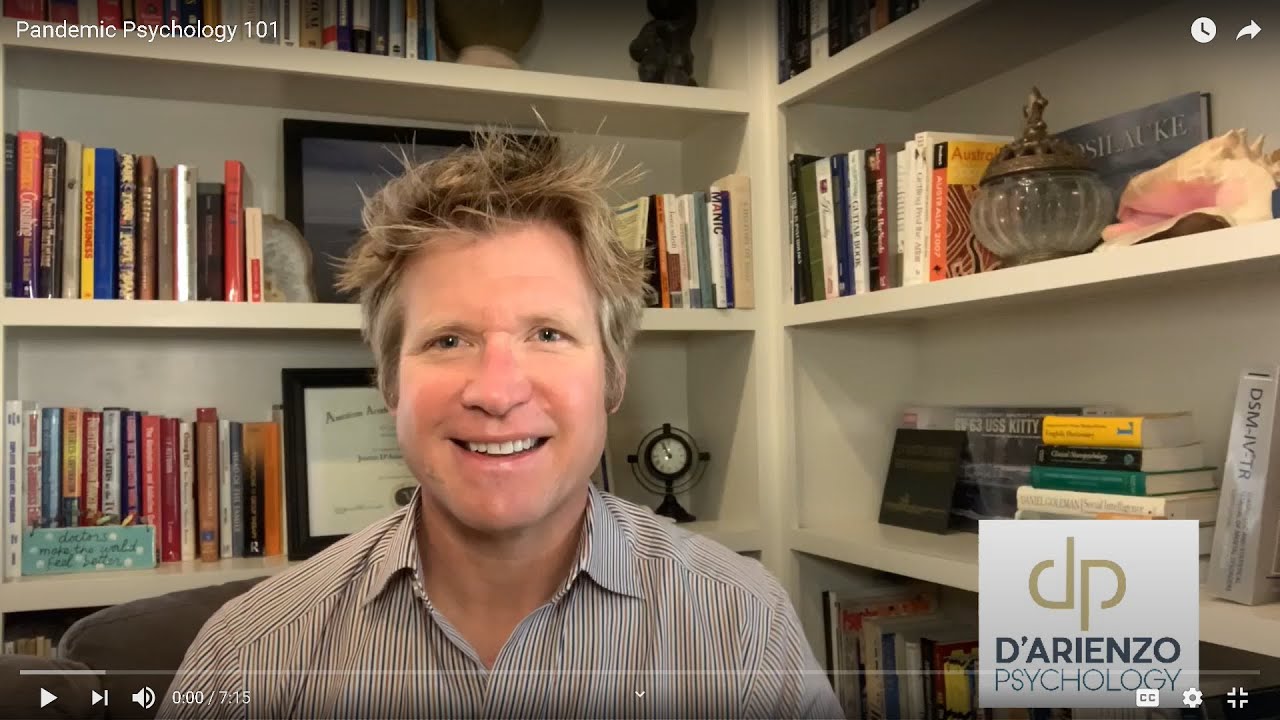 Dr. D’Arienzo, Board Certified Clinical Psychologist here.  Believe it or not there is a sub-field of Social Psychology called Epidemic Psychology which describes the pattern of individual and collective fear and behavior that is separate from the actual disease during an epidemic or pandemic. The late Phillip Strong, Medical Sociologist, coined Epidemic Psychology in the 90’s. Understanding how we think, feel, and behave when faced with a significant crisis like a pandemic that challenges global social order is crucial if we want to avoid past mistakes and effectively work together as a global people using kindness, reason, science and technology to eradicate this disease. Let’s talk about these psychological phases of fear and panic, stigma and moralizing, and calls to action that move in sometimes messy and destructive waves.

The primary or first response is fear and dread. One experiences suspicion and fear that one may have the disease already or that you may get sick, and there is widespread fear regarding transmission especially when information is inconsistent and wrong. There is also great suspicion about the reality of the disease. For instance, when someone points a gun at you, your first response is usually denial, shock and paralysis as you try to figure out whether what is happening is actually real. Remember that leaders are not immune to these states of disorientation.

Certainly, this is the time period when leaders have to get their ducks in a row quickly. Initial panic gets resolved with authoritative data and information, when new behavioral routines are outlined, and there are collective and individual actions taking place. Getting out sound and consumable information is key. Unfortunately, these actions are often delayed and mixed.

The secondary response is the epidemic of explanation and moralization by blaming, stigmatizing, and discriminating. Those belonging to feared disease carrying groups may become stigmatized. blamed, avoided, segregated, or abused. During the first wave of the bubonic plague in the 14th Century, parents abandoned their sick children and doctors, grave diggers, and many clergy abandoned the sick, but later realized this only led to higher mortality rates. Yet as late as the 20th Century, we stigmatized and blamed the gay community in the 90’s for AIDS and yet as late as 2003 during the SARS outbreak, healthcare workers and their families were stigmatized and shunned. Humans are an interesting bunch. We are more irrational than rational. Despite a good understanding of disease concepts, we still seek simple explanations, whether relevant or not, and make assumptions based on behavior, ethnicity, and social stereotypes. We seek to avoid uncomfortable feelings of randomness even about diseases and about dying. We avoid our sense of vulnerability by blaming other groups on deviant behavior. Even our leaders forget about science and reason and stigmatize and blame others and each other when things seem to be out of their control.  We probably should be doing a better job relying on reason in 2020, but already it seems that many of our resources and valuable time is squandered on blame. One side of the political isle’s position is about inadequate health services and not responding soon enough while the other side blames other governments and organizations.  Instead of focusing on why and how at this juncture, our focus should be on the Power of What. What are we doing about it RIGHT NOW?!

The tertiary, or third response, is the epidemic of action or disease management, and the realization about the complexity and fragility our global social order. This third level of response is heightened when the disease’s onset is rapid or is transmitted through rapid person to person infection which is what we have with the Coronavirus. In this phase the epidemic is becoming more personal and either you are getting sick or you learn of many others getting sick, and the government is taking swift mitigation actions like social distancing and shutting down the economy.  How people respond to these actions and how they are affected determine whether they will become more susceptible to the disease or not as well as to more serious psychological problems. With wrong information, many people develop psychosomatic disorders where they begin to experience symptoms similar to the disease when they actually don’t have the disease. At this point, there can be fueled hysteria or great economic and welfare loss both individually and collectively. The tertiary response is what Trump referenced when he was concerned about the cure being worse than the disease.

We are all experiencing this tertiary response, along with repeated waves of the first two phases, and the impact is heavy and burdensome, especially when pundits and experts who all have an agenda and want to shine disseminate inconsistent information. We must filter the information and maintain course and not lose positive psychological steam, or we are greatly susceptible to panic and not following guidelines and are more vulnerable to contracting the disease.

Certainly, every pandemic is different, and we have greatly advanced since the advent of this 1990’s model, and we probably need an updated model based on the success and the willingness of our global participation and acceptance of the necessary behavioral interventions like social distancing. Further, knowing that humans collectively respond psychologically in similar patterns when faced with crises and epidemics is helpful. You can’t change or improve what you can’t see and don’t know. We need to take necessary action to prevent and transcend panic, discrimination and blame, and this disease, and keep ourselves and our leaders in check. Being sensible and preventing panic begins with you and with those living in your home. Be a critical consumer of information, and remaining reasonable, practical, purposeful, empathic, fluid, and self-aware is crucial. Keep physically social distancing without isolating others. Let’s stay the course. We must rely upon technology and science. This is not the Black Death of the 14th Century nor the Spanish Flu of 1918. As you are listening to this, reports suggest there are already 70 vaccines being developed and three in clinical trials. We will find a cure. Be calm, care for yourself and your family as best you can. You, me, we got this!